Category Archives: Spotlight of the Week

Today, we share a very touching “Case of the Week” from our Grayson KY office as told by Regional Manager, Tammy Black.

We were contacted by the daughter of a Veteran. She said that her dad was in bad health and lived in a trailer and had no air conditioner. Only a fan. He has COPD and other breathing issues. After talking with her a while I was able to talk to him as well. He was so humble. He said, “Ma’am, if you could just find me one to borrow I would give it back”. I said absolutely not. It is our honor to give back to you the way you gave to us. We drove over an hour to his local Walmart. He met us there and we were able to give this man an air conditioner. This is what makes our work so fulfilling. He just kept saying thank you. We told him and we want to tell all veterans thank you! Without you, none of us would be living the life we get to live. It truly was an honor. 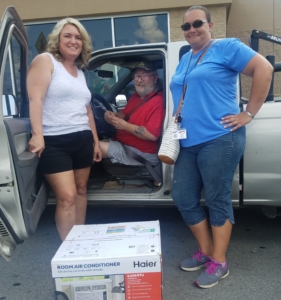 September 4, 2017Spotlight of the WeekBy isynergymaster

Today, we want to share an event that helped 52 veterans as our “Case of the Week” that took place at our Grayson KY office. The event was documented by our Regional Manager, Tammy Black.

We had our food giveaway today and were able to give over 52 veterans a full box of food. We had volunteers help them out to their cars with the food. We were able to provide fresh produce, meat, bread, snacks, and non perishable items. It makes us to happy to be able to service this many veterans in one day! One veteran with six children said without Veterans’ Outreach that he wouldn’t be able to feed his family. We say our prayers and always thank God for Veterans’ Outreach at each meal. No Veteran should go hungry! 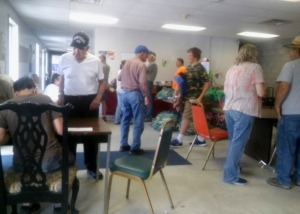 August 28, 2017Spotlight of the WeekBy isynergymaster

Today, we want to highlight a grateful veteran and his wife. This “Case of the Week” comes from our Liberty OH office as told by Teri Ely, Executive Director.

I met with Bob Julian, our Services Director, to discuss his recent case load. He shared with me a very touching Thank You card that had been mailed to our office.
The veteran could not afford new glasses, unless they used funds that were designated for their utilities and other household expenses. Bob was able to set him up with an eye exam, free glasses, help with fuel, and a tote bag of groceries from our Serve Veterans NOW Food Pantry program, made possible by Wal-mart Foundation. They were so grateful, they sent a card.

August 21, 2017Spotlight of the WeekBy isynergymaster

Today we would like to share a “Case of the Week” from our Hartselle AL office as told by Carol Wheeler, our Office Manager.

On Tuesday, the 11th of July, we had a Navy vet stop in who had fallen on hard times. He is a carpenter by trade and he had a partner who was in the landscaping business. The partnership fell apart and the landscaper absconded with all of his tools of the carpenter trade. He had no real way of making a living, he did have a temporary sign on his truck announcing that he was a veteran looking for work.

He had fallen behind on his truck payment and his phone had been turned off. He had no way of contacting his prior customers. He stated that when his ordeal started he weighed over 300 lbs. and was now down to 220. The majority of the weight loss was due to stress and not eating.

I quickly went to our food pantry and filled up a box of groceries, mostly food that did not have to be cooked. He then proceeded to consume various food items right in the office, it was clearly evident that he had not eaten in a while. We also supplied him with tooth brushes and pastes, as well as other toiletry items. We were able to make his truck payment and also donated a little gas money. We then directed him to the HUD/Veterans Affairs to possibly help him with his phone and housing.

August 14, 2017Spotlight of the WeekBy isynergymaster

Today, we would like to share a “Case of the Week” from our Sarasota FL Office, as told by Bob Graham, our Regional Manager.

The daughter of a veteran approached Veterans’ Outreach for assistance on the suggestion of the Florida American Legion. Her father is at a point in life whereas he can no longer live on his own. He needs to enter an assisted living unit due to crippling heart disease and diabetes. He suffers these ailments as a result of Agent Orange exposure in Vietnam, and cannot function on his own. His daughter has been helping him but his problems are now such that she can no longer cope, and is trying to put together sufficient resources to help him on his rent – we were the first to quickly commit to assistance.

August 8, 2017Spotlight of the WeekBy isynergymaster

We would like to share a “Case of the Week” that really touched one of our volunteers’ hearts from our Liberty office.

A veteran came to our office after experiencing a devastating fire. He had been completely burned out and had absolutely nothing. He had never been here before, so we were able to set him up with a large tote of groceries that would last a couple of weeks – made possible by a grant from Walmart Foundation. We also were able to help him with clothing, our volunteer in the clothing pantry knew just where to look to find everything he needed.
The veteran was overwhelmed, couldn’t help but cry tears of gratitude.

July 31, 2017Spotlight of the WeekBy isynergymaster

This week, we bring you another “Case of the Week” from our Sarasota FL office.

Lights ON for Army Veteran Wife

A wife of an Army veteran, recently widowed, has not received any VA survivor benefit payments to date. The VA is garnishing them for disability “overpayment” to her husband in the past. Not surprisingly, she has fallen behind on her various bills. She has contacted a number of agencies all of whom said they couldn’t help until she was actually evicted from her home(!).

We stepped in on the most urgent, threatened power shutdown, paid the outstanding bill and provided an example to other agencies about assistance before being thrown out on the street.

July 24, 2017Spotlight of the WeekBy isynergymaster

Today, we share a “Case of the Week” from out Hartselle Alabama office, we call it:

Last weekend, the Youth Group from Breakthrough Ministry and a neighbor, Connie Cobb launched their own food and funds drive to benefit Veterans’ outreach. They collected a pick up truckload of food. The also presented us with a check for $522 with more to come in.

They have also volunteered to come and help sort and stack the food items. The food pantry has served many veterans when they needed it most. The church is located adjacent to our parking lot and Ms. Cobb lives just across the street.

Talk about good neighbors going the extra mile for our veterans. Another selfless act in support of our nation’s heroes.

July 17, 2017Spotlight of the WeekBy isynergymaster

Today, we share a “Case of the Week” from our Sarasota FL office, we call it:

A Navy Vet from northern Florida reached out for help. He served 6 years, including a tour in Guantanamo as a Hospital Corpsman during interrogation.

Not surprisingly, he has PTSD and has real difficulty dealing with his various issues. Recently laid off, he’s fallen behind on car payments and is close to having it repossessed. If he loses the car, he can’t take on a part-time job at FedEx which he’s been offered. We arranged and activated a payment which his lender said was sufficient to set up a new, and more affordable, payment plan – enabling him to take on the new job and meet that commitment!

July 10, 2017Spotlight of the WeekBy isynergymaster

Today, we share a “Case of the Week” from our Hartselle Alabama office as told by Carol Wheeler, our Office Manager.

Last Tuesday, the 13th, a veteran was on his way to the local food bank to obtain aid. He happened to stop by Veterans’ Outreach to say hi to Mr. Bob and Ms. Carol. They learned that he has had a tough time recently, he is in his 60’s, disabled with lung issues, and his wife passed on a short time ago.

He was unaware that Veterans’ Outreach in Hartselle had groceries that have been provided by local churches and the good people of Hartselle. Ms. Carol set him up with the groceries that he needed. The veteran was very thankful that he did not have to continue his trek to the food bank, as it saved him approximately one mile of walking.